A revival: Madiran, the land of Tannat

A revival: Madiran, the land of Tannat

From its first mention in 1783, Tannat and Madiran have been almost synonymous. The town Madiran is in the rolling hills of Gascony, in the South West of France close to the Pyrenees. The climate is warm, surprisingly so for being only 100km distance from the Atlantic Ocean, and has varied soils of sand, which give the wines a bit more accessibility in their youth, limestone rich clay, known for concentrating the body of wines while keeping freshness, and iron and manganese rich pebbles that have washed down from the mountains over the millennia. 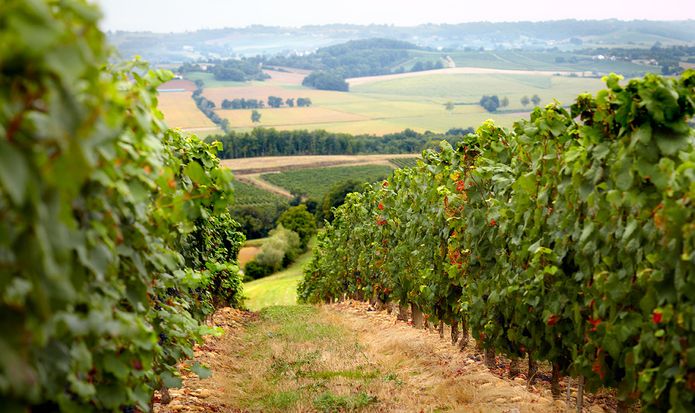 Tannat is the principal variety used here, known for making deep, dark, full, rich and, you guessed it…tannic wines. It has thick skins which contain many phenolic compounds such as tannins, but also anthocyanins (which provide pigment for red wines) and high levels of procyanidins, with which a direct correlation of heart health has been drawn. This has caused an uptick in the awareness of the once unfashionable variety in conjunction with the region having double the national average of nonagenarian men. An increase in quality from producers such as Alain Brumont who has worked tirelessly to establish the awareness of this small region on the global stage through his wineries, Château Montus and Château Bouscassé. Madiran can be unforgiving in its youth taking many years to mature, however modern winemaking techniques have softened the tannins and released its earlier drinking potential. In its youth the fruit is dark and brooding, the herbs are fresh and aromatic, but with age Madiran often has flavours of dried fruits and herbs wrapped up in tobacco leaves, and is full bodied with well-integrated tannins, the results are unparalleled.

Outside of France Tannat has found a second home in Uruguay, where it was introduced in 1870 and by 2009 it was the most widely planted variety in the country. There are also plantings throughout the world, including New Zealand and Australia. These wines, while very enjoyable, often lack the richness and complexity of the grape’s ancestral home. So whether you’re going to cellar it, or raise a glass of Madiran now; Santé!