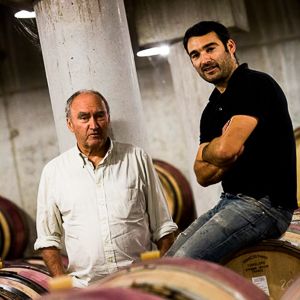 Equis is a project from Maxime Graillot - Alain Graillot’s son - and Thomas Schmittel. Alain is world-famous for his delicious Syrahs and Maxime takes after his father in his love and admiration of the grapes potential. Based in Crozes-Hermitage, Maxime is a great winemaker, producing artisanal wines with maximal varietal and terroir expression ageing them in old Burgundy barrels. Maxime and Thomas have approximately 15 acres of sandy soil with round, gravel-like stones, and they work very closely with the local growers in an organic way.

Maxime has added a small holding in Crozes, Domaine des Lises, to the portfolio. He also manages several other vineyards in Cornas, St Joseph and Crozes, selecting tiny parcels of the very best grapes to make the Equis range. They are all in the same vein as his father’s estate - the Equinoxe is a modern interpretation of Crozes for early drinking, whilst the Crozes Lises and St Joseph ignite a year or two in.