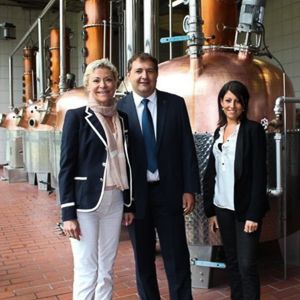 The Massenez family started distilling in Alsace in the 1870s. Credited for being the first to distill wild raspberries, the distillery became famous for capturing the essence of fruit in its purest form.

Distillerie G. E. Massenez remains today one of the last family-owned firms dedicated to the production of traditional, top-quality brandies and liqueurs. Uncompromising on quality, G.E. Massenez is today universally acclaimed for his eaux de vie (fruit brandies) such as wild Rasperry and Williams Pear as well as his Cremes of Peach, Blackcurrant, Blackberry, etc... The distillation method is still a closely-guarded family secret.